Do you believe fall is the best season?

September 15 to October 15 is Hispanic Heritage Month, which coincides with the turning of the leaves, crisp weather, and pumpkin spice everything. We are strong proponents of the notion that workers should be able to bring their entire selves to work, and this includes recognizing and appreciating their racial, ethnic, and cultural backgrounds.

The definition of Hispanic Heritage Month

The United States was becoming increasingly cognizant of the multiplicity of identities in its communities during the 1960s and at the apex of the civil rights movement. Under the leadership of California Congressman George E. Brown, National Hispanic Heritage Month was first observed as a celebratory week commencing on September 15 of that year. Brown represented a sizable portion of the San Gabriel Valley and East Los Angeles, two areas historically dominated by the Hispanic and Latinx populations. Soon after, Hispanic Heritage Week was formally proclaimed by President Lyndon B. Johnson. 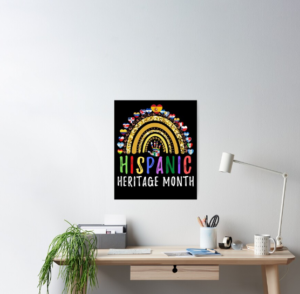 Just why September 15? This particular day was selected since Costa Rica, El Salvador, Guatemala, Honduras, and Nicaragua all celebrate their independence on the same day. On September 16, 1810, Mexico also commemorates its liberation from Spanish rule. Such a great month for revolution! George H.W. Bush, who had also sponsored the original 1968 measure, later changed Hispanic Heritage Week from a week to a month.

Now that we’ve covered Hispanic Heritage Month, let’s discuss what your company can do to honor Latino/Hispanic employees and their cultures at work.

Race in the workplace may be a sensitive topic, as we highlight in our essay for Black History Month! Many organizations make the mistaken effort to be “colorblind” to promote equality. Your staff members ought to be allowed to openly talk about, appreciate, and take pride in their ethnic and cultural heritage. After all, 18% of the population in the United States is of Hispanic heritage. It’s past time we honored the lengthy history of our coworkers. Be accepting of your differences and willing to learn! 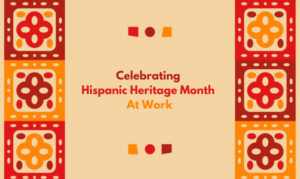 Given that, the following are some additional best practices to bear in mind while you observe cultural holidays at work:

Make sure to incorporate any Hispanic or Latinx staff you have! After all, you’re celebrating them! Talking about personal experiences, family history, and educational opportunities is a terrific idea at this time. Give them a customized T-shirt as well as this celebration to show them that you value their efforts and contribution to the business regardless of their traditions and ethnicity. You can modify your style and look to suit your organization. 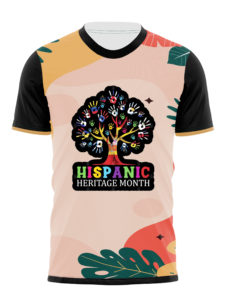 On the other hand, don’t assume that someone would want to take on the effort to prepare an event for the organization just because they are Hispanic or Latinx. As a result, they are put in charge, and if they are a member of a visible minority at your firm, they may feel devalued in terms of their responsibility at work, especially if this project is new to your business. Don’t forget to thank individuals who chose to participate by publicly recognizing them. In particular, for those Hispanic employees who have been a member of your company for a very long time, custom pin buttons are a suitable choice for this acknowledgment to celebrate and promote their hard work over the years. 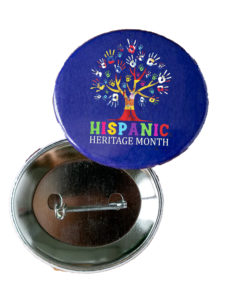 Organize a fundraiser or unite your resources to support racial justice. When it comes to funding for education or legal services, giving money to a charity can sometimes have the biggest influence. To promote your cause, you might instead just give out customized bags, and mugs with social equality messages on them. You can encourage the organization’s members or workers to take part in a demonstration against racial prejudice. As a result, people will learn to value and respect one another, regardless of race, and your activism will not be forgotten. Additionally, To inform people of your movements, you may also design a customized flag with Hispanic Heritage elements.

You should encourage everyone at your company to observe Hispanic Heritage Month in the name of diversity! Most likely, your teammates will value and respect your work. You should throw a party for your office, business, or organization as the team’s leader to make everyone feel valued and included. You can greet them by flashing a banner with the word “Unity” on it. In particular, for workers or other group members whose contributions should be appreciated notwithstanding their ethnicity and color, we ought to commemorate the Hispanic heritage. This is also an opportunity to thank them for their efforts in making the group successful. Since we all own smartphones, we can also present them with customized phone holders as a way to express our gratitude for all they have done for the group. By doing this, they will be more comfortable and more motivated to work for everyone’s benefit.

There is still time to organize an enjoyable event for your group to celebrate Hispanic Heritage Month together! Has this post given you any new ideas? Check out our official website at 24hourwtistbands.com or leave us a comment below with your thoughts.